Today we got up and headed out back out to our boat with intentions of starting the first of multiple days of cleaning it up.

We loaded up the SEAHAWK II into the Jeep and headed for the water.  As we got close, we noticed that the wind was quite fresh and a little chilly.  We figured that it might be a bit uncomfortable out on the boat, but we would be cleaning anway…so who cares.

When we actually got there, it turned out to be much different than we expected.  The wind was ripping through the anchorage in the oppposite direction from the day before, it was blowing almost straight out of the North.  A classic Northerner, but still, no big deal right?  Our boat has two anchors out with plenty of scope and the little cove is fairly well protected…and even further, it is right off of the intracoastal…not even exposed to the ocean in any way.  Read more…

Well, it was decided before we even got out of the car that we were not going out to our boat.  The wind was probably around 25 – 30 mph (or more) with some pretty big gusts.  The waves were not huge, but too big for our little dinghy and with the wind, the white caps were spraying over the sea wall which is probably about 7 or 8 feet to the water.  Both floating docks were washed over with water and churning up and down with the waves like long snakes sliding along the top of the water.  We would not be able to even walk on them, let alone put in our little rowboat.

However, we were lucky.  Erin didn't want to leave the car but I wanted to check the anchor lines out from our boat.  As I walked towards the dock I noticed a boat very close to the sea wall…a large sailboat, probably about 35', had run hard aground.  It was about 5 feet from a large pile of rocks just bouncing up and down on the sand underneath.  The Coast Guard pulled up and sent a guy ashore to check the anchor and possibly try and save the boat.  The Coast Guard guy pulled up the anchor chain and as he got to the end…there was no anchor attached! 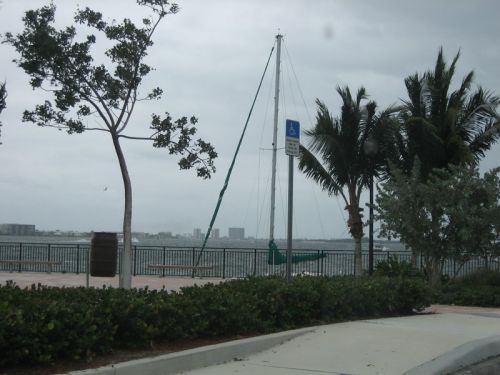 Another boat that had been anchored directly next to our boat was also missing.  As we drove around the park to leave, we noticed that the boat was washed up on the little beach that we had launched our dinghy from the previous day. 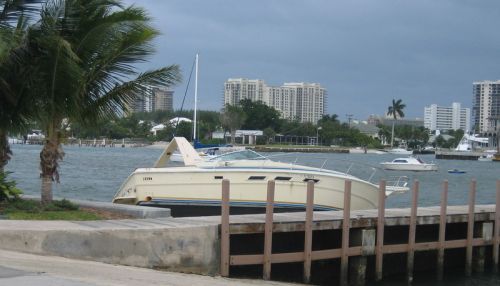 So, two boats washed ashore and the wind still whipping, we sat around for awhile watching the scene and then left.  The wind has been blowing steady all day and is not predicted to die down until tomorrow evening.  So, we will be a little uneasy for the next day or so hoping our anchors hold and that our lines don't chafe through…