Today was a boat day.  Or at least a partial boat day…we did not end up spending as much time out on the boat as we wanted (Erin didn't feel well), but we got quite a lot accomplished.

Erin started the long process of cleaning up down below; with her trusty bottle of bleach and water, she managed to wipe down most of the main cabin. 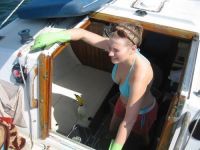 My job was to (and has been for awhile) get the motor running.  The motor has an electric starter and the previous owner told us he never got it to work.  However, he went through an elborate process for manually starting it.  I thought it would be no problem to figure out, but after two different trips out to the boat and no luck, I was starting to think I needed to give him a call.  Lucky for me, I have Erin and she had the instruction manual.  READ MORE…

The engine manufacturer was obviously very optimistic about the reliability of their electric starter because the manual start instructions were under the "emergency start" procedures.  Either way, I found that the key ingredient I was missing was a throttle control (choke) lever that was on the electric starter…and that even though the electric starter wasn't being used, the choke still worked.  I had been using a lever on the engine (that I assumed was the choke) that did not perform the same function.

So, on the second pull…after following the instructions…the engine came alive like it had been waiting for me to get it right.

One battery was half dead and the other was completely dead, so I left the engine running for about half an hour to put some charge on both, and then tried the starter with both batteries selected.  It actually sounded like it tried to turn the engine over…much more progress than ever before.  So, I am confident that with a full charge, we will have a an electric started engine.

In other news, our trusty SEAHAWK II appears to have it's first leak.  We had to pump it up for the return trip to the dock.  It wasn't bad enough to put us in any danger of returning…it's just a pain.

We also managed to get the camera out to the boat…so enjoy the pictures in our pictures section. 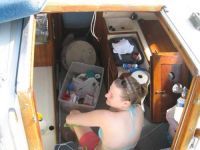